Top 10 Greatest Footballers of all Time

This list cannot be just trimmed down to 10 men as it would be injustice for some of the best players in history to miss out. But there has to be only 10 and so there is a mention for some of the stars to have just missed out on the list.

His nickname in Brazil, “The Joy of the People,” tells much about what Garrincha offered on the pitch. Born with both legs that bent to one side, the boy from Rio, whose demons ultimately caught up with him, befuddled defenders with the kind of dribbling and ability to change direction never before witnessed. While Pele is the Brazilian known around the globe, many in his home country have more love for Garrincha. When Pele was injured, it was Garrincha who inspired Brazil to their second World Cup triumph in 1962.

The Galloping Major was a part of two of the greatest teams of all time. The most integral part of the “Magical Magyars” Hungary side of the early 1950s, Puskas and his teammates appeared certain to lift the 1954 World Cup, but somehow lost in the final to Germany after Puskas had put them ahead and was then controversially denied an equalizer in the dying stages. Thankfully, his brilliant career did taste glory at club level, having won three European Cups with Real Madrid, including in 1960 when he scored four in the famous 7-3 defeat of Eintracht Frankfurt. 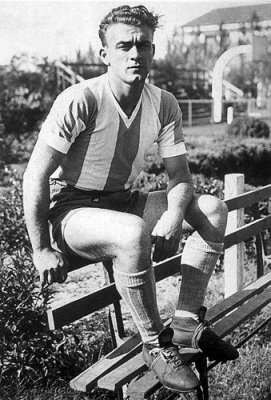 In marking his sad passing, Real Madrid had no qualms about declaring Di Stefano “the best player of all time” in a headline on their website. It is not hard to see why. Born in Argentina, but having also turned out at international level for Colombia and Spain, Di Stefano played a key role in the history of European soccer, having famously come close to joining Barcelona before moving to arch rivals Real Madrid, and becoming an integral figure in the Spanish side winning the first five European Cups.

CR7 comes in at No. 7 and for good reason. He has shown little sign that he won’t continue to be the brightest of stars on a Real Madrid squad filled with world-class players. Once criticized for lacking end product, he has developed into the world’s most effective player, a testament to his relentless desire for self-improvement, which can also be seen in his phenomenal athleticism. One of the greatest goal-machines of all times.

For decades every defender with any remote ability on the ball has earned comparisons to Beckenbauer, but none have matched the graceful brilliance with which the man nicknamed Der Kaiser strode forward with the ball and initiated attacks during the 1960s and ’70s. The scorer of an impressive five goals in World Cups, Beckenbauer finally lifted the trophy as captain in 1974 after suffering painful defeat in the 1966 final. Only a certain Paolo Maldini matches him in global appeal as a defender.

Scored two goals with his head to lead France to victory in the 1998 World Cup final, but it was with his feet that Zidane brilliantly cut teams to shreds. He was a maestro with the ball, weaving passes with perfect weight to his teammates. A clutch performer, Zidane almost single-handedly inspired France to the World Cup final in 2006. It came four years after he scored one of the all-time great goals in a European Cup final to win the trophy with Real Madrid.

The most recognizable member of the great Dutch team of the 1970s that revolutionized the game with their Total Football, Cruyff was the total footballer. While nominally a center-forward, the Amsterdam-native was ahead of his time in dropping deep to the befuddlement of his opponents. Sadly, fell agonizingly short of winning the World Cup, but won three straight European Cups with Ajax. The “Dream Team” of Barcelona under Cruyff would go on to pave the way for the Barcelona of today who heavily derive his concepts.

Maradona played in an era when defenders were allowed to get away with brutalizing their more skilled opponents, and yet he was still majestic. A hero for leading Italian club Napoli to their first and still only two Serie A titles, his greatest achievement came when he inspired Argentina to World Cup success in 1986, scoring mesmeric goals in both the quarterfinals and semi-finals. Many people do consider him to be the rightful No.1 in the list.

Bookended his career at the top level with World Cup wins, first as a brilliant 17-year-old in 1958 and then 12 years later as part of one of the greatest teams to ever grace the competition. In between he picked up another winner’s medal in 1962, although was injured during the tournament. The all-time top scorer for Brazil, Pele fired in a total of 1,281 goals during a glittering career.

The key member of the greatest club team in history as Barcelona have dominated Europe, Messi can change a game in an instant with unfathomable close control while gliding forward at lightning speed. The Argentinean has answered doubts about his ability to perform for his country after taking his team to 3 international finals in 3 years single-handedly. 5 Ballon D’or, 4 Champions League and a total of 29 titles and still a long way to go before retirement. Can anyone ever be better than the little magician?

A die hard football fan since the days of Ronaldinho. Also a Civil Engineer and avid reader of books. Has a passion for writing and is a columnist for Barcablog, Weloba and Grup14 websites.